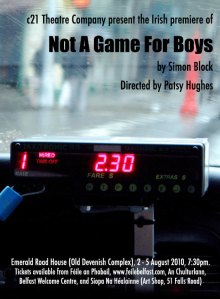 Chris has just started rehearsals for Simon Block’s Not A Game For Boys, in which he is starring. The play will be staged as part of Feile an Phobail 2010.

Eric, Oscar and Tony are taxi drivers. They escape for one evening each week to play table tennis as a team in a local amateur league. Eric would rather die than be relegated to division two. Oscar has just attended a funeral and fears his unmarried, lonely life mirrors that of his deceased colleague. Tony‘s casual affair in the back of his taxi is threatening to destroy not only his relationship, but his friendships… and the future of the team.

Not A Game For Boys is a laugh-out-loud comedy: a tale of competitive obsessions, played out in a small hall on a back street of Belfast. Though the characters play with bats and balls, the main game takes place anywhere but the table…

Chris previously starred in PS, Your Cat Is Dead as part of Feile 2008. While that particular role involved some nudity ‘in the name of art’, Chris has promised that this year he’ll be keeping his clothes firmly on!

Tickets are £7 and available from Feile an Phobail, www.feilebelfast.com, An Chulturlann, Belfast Welcome Centre and Siopa Na Healainne (Art Shop, 51 Falls R0ad.) Alternatively, you can buy them here.