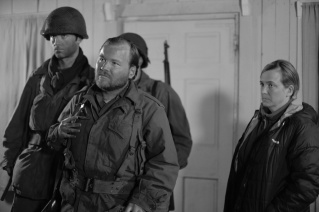 After a few test shoots with Focus Productions I was asked to play the role of Jim in their latest film Respite at Christmas.

All filmed locally, the film is set in the Ardennes forest during the Christmas of 1944. A widowed mother attempts to bring together two unlikely guests.

Filled with a great cast and crew – and with help from a war re-enactment society for authenticity – hopefully you’ll enjoy the final product  as much as we did making it!

There will be a free screening of Respite at Christmas this Saturday at 11am at the Odeon Cinema, Victoria Square, Belfast. Hope to see you all there.

Here’s a teaser of what’s in store for you!

Chris is an Irish actor who is based in Belfast, Northern Ireland. http://www.imdb.com/name/nm1247379/?mode=desktop&ref_=m_ft_dskr He has collaborated with the best directors in film, television and theatre in projects such as the award-winning The Magdalene Sisters (Momentum), The Boxer (Universal), Fifty Dead Men Walking (Brightlight Pictures), Good Vibrations (Revolver Films), Mrs Brown's Boys D'Movie (BBC Films), 71 (Warp Films), Shooting For Socrates (New Black Films), and High-Rise (Recorded Picture Company). On TV, Chris has played leads in The Guards (TV3) The Man Who Crossed Hitler (Hardy Pictures for BBC) The Clinic (RTE) The Family (BBC) Missing (BBC), The Titanic Enquiry (BBC), Ripper Street (BBC), Galavant (ABC) and The Fall (BBC). Chris has worked with some of the top theatre companies in the UK and Ireland. Additionally he is proud to have both starred in and co-produced a successful UK/Irish tour of The Wrong Man, which received critical acclaim throughout its run.
View all posts by Chris Patrick-Simpson »

Posted on December 17, 2013, in Uncategorized. Bookmark the permalink. Leave a comment.