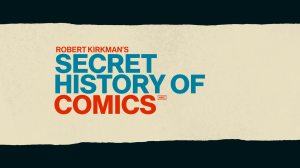 I had the privilege of playing the role of William Marston, the creator of Wonder Woman, in this show, Robert Kirkman’s Secret History Of Comics. Filmed in Canada earlier this year for AMC, it has been a perfect start to my new career adventure over on that side of the world.

It was an eye-opening experience in more ways than one. I learnt so much of the back-story to the creation of the Wonder Woman character and what went into making one of the most successful comics and such an iconic female character.

When asked about this project, Robert Kirkman said in a recent interview:

‘It’s a universe of amazing stories that has been driving pop culture as a whole. Being able to explore the nooks and crannies of this world has allowed me to find out secrets even I didn’t know.’

If you are a comic book fan or have a passing interest you’ll really enjoy this one. It’s currently airing in the USA & Canada but will be available in Ireland & the UK in January!